A few years ago we described a heat exchange application that uses the warm water in the Paris sewer system to heat buildings above. Now, researchers at EPFL in Switzerland have been able to calculate convection heat transfer in rail tunnels, where heat from the ground mixes with heat generated by trains as they accelerate and brake. The modeling tools make possible a geothermal system for cities that can offset electrical and fossil fuel-based heating and cooling requirements. The team’s calculations for the planned M3 Metro line in Lausanne estimates that the harvested geothermal energy can heat and cool more than 1500 apartments.

Until now, engineers have been unable to accurately calculate the amount of heat that tunnel air contains. Researchers at EPFL’s Soil Mechanics Laboratory (LMS) have overcome that problem by precisely estimating the convection heat transfer coefficient. Their findings have been published in Applied Thermal Engineering.

This breakthrough paves the way for innovative applications involving so-called energy tunnels that can supply energy to built environments. The team also tested its model on Lausanne’s future M3 metro line which, once complete, will carry passengers between the city’s train station and the Blécherette district to the north.

“Our research shows that fitting the heat-recovery system along 50–60% of the planned route – or 60,000 square meters of tunnel surface area – would cover the heating needs of 1,500 standard 80m2 apartments, or as many as 4,000 Minergie-certified energy-efficient units,” explains Margaux Peltier, a scientific assistant at the LMS, whose Master’s research forms the basis of the article. The system also allows heat to be stored so it can be supplied to homes when needed. “Switching from gas-fired heating would cut the city’s CO2 emissions by two million tons per year,” adds Peltier. Her calculation does not include the savings gleaned from metro stations or at the planned rolling-stock depot in the north of the city, which could also benefit from the system. 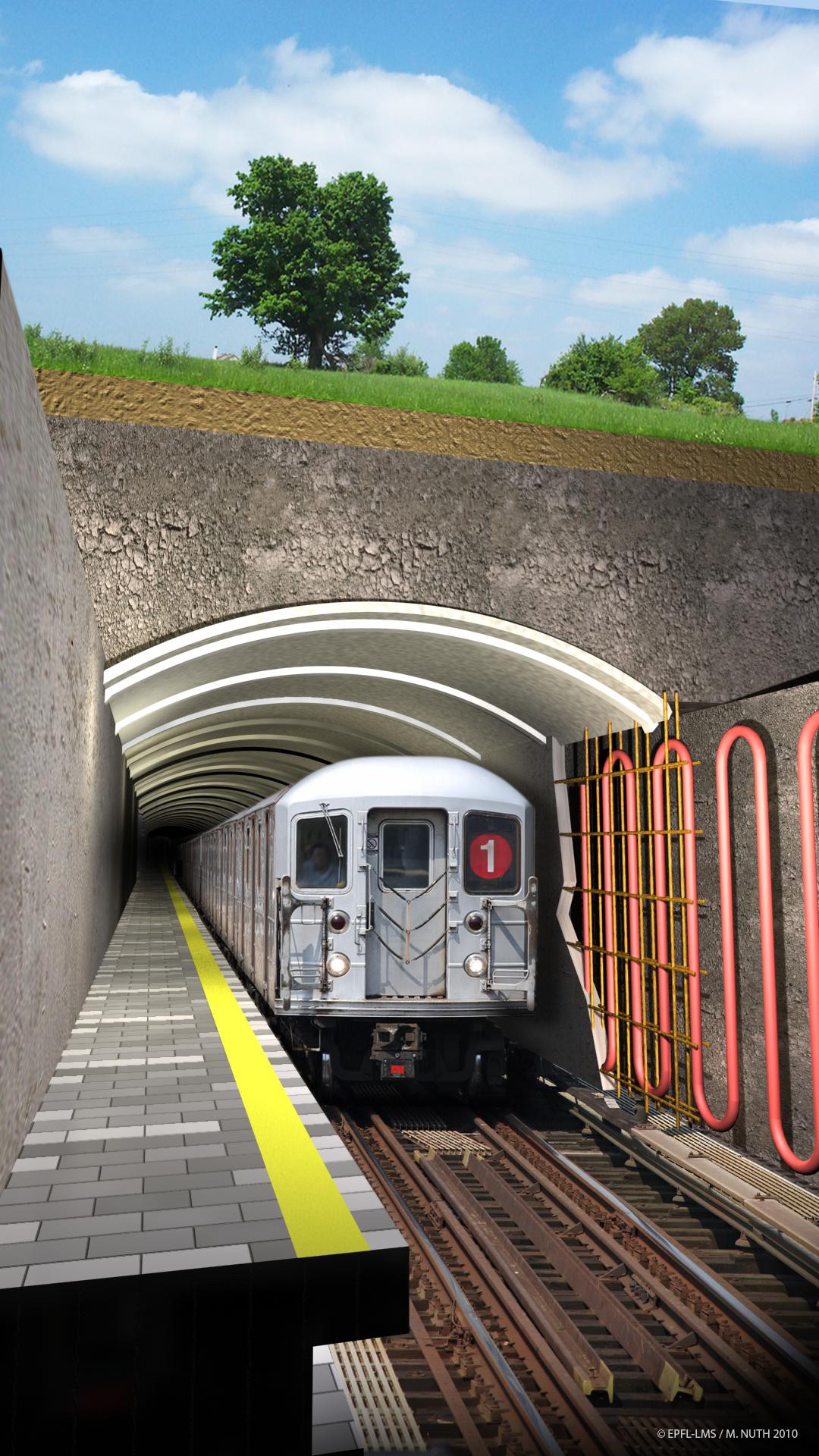 Built into the subway walls at various intervals is fluid-filled piping that collects heat, connected to a heat pump. In winter, cold water will be pumped into the pipes, emerging hot at the surface. The opposite will happen in summer.

As the temperature naturally stabilizes in underground tunnels, excess heat or cold is evacuated to the surface. The resulting warm airflow can often be felt at metro tunnel entrances. The idea behind the innovation is to harness this surplus warmth in addition to heat naturally present in the ground.

The system works in a similar way to a refrigerator, with plastic pipes containing heat-transfer fluid, or simply water, placed at regular intervals inside the concrete tunnel walls and connected to a heat pump. In winter, cold water will be pumped into the pipes, emerging hot at the surface. The opposite will happen in summer. According to the researchers, the system would be cheap and energy-efficient to install and would have a lifespan of between 50 and 100 years, with only the heat pumps having to be replaced every 25 years.

Once equipped, heat from the tunnel would cover up to 80% of the heating needs of local apartments throughout winter, with the shortfall preferably coming from other renewable sources. But what makes geothermal systems like these unique is that they work in summer too. “The tunnel would act like a highly reliable, year-round heating and air-conditioning system,” says Peltier, adding that it would make a real difference to keeping Lausanne’s homes cool during hot weather. The system could even chill the ice rink set to be built in the city’s new Métamorphose eco-district.

“This article underscores the fact that energy-tunnel technology is mature and could be deployed at district-wide scale,” explains LMS head Lyesse Laloui. “It remains to be seen whether Swiss companies are now prepared to take the lead. Globally, we’ve only seen systems like these used on test sections so far.” The researchers have presented their findings to Lausanne’s utility agency (SIL), local public transport operator (TL), the Canton of Vaud, the prime contractor working on the new metro line, and the City of Lausanne.