In these days of increased concern about climate change, two of the greatest vulnerabilities affecting our current food production are the availability of arable land and the exposure of crops to extreme variations in weather. A new farming concept from researchers at the University of Nottingham may provide a method — although it may seem extreme — to keep some crops safe from the vagaries of the land market and the weather.

The ideas of “deep farms” are being promoted by Professors Saffa Riffat, Fellow of the European Academy of Sciences and President of the World Society of Sustainable Technologies, and Professor Yijun Yuan, Marie Curie Research Fellow.

Cost-effective deep shafts for crop planting would be constructed using new drilling techniques.  Existing coal mining and civil air defense tunnels, many of which are now abandoned could also be used for crop production. The new deep farms could be employed for intensive crop farming to feed rising urban populations.

The newly-patented concept for deep farms is an alternative approach to large scale crop production. Standard farming when you consider it, is pretty inefficient, requiring large-scale use of resources including land, fertilizers, chemicals, and water. Additionally, surface soils can absorb harmful materials. Cultivated land and water are heavily polluted in many countries. Riffat writes that about one fifth of arable land in China is contaminated with levels of toxins higher than government standards (2014 data), and that 14% of domestic grain contains heavy metals including lead, arsenic, and cadmium (2015). 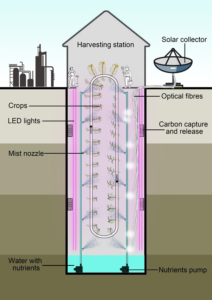 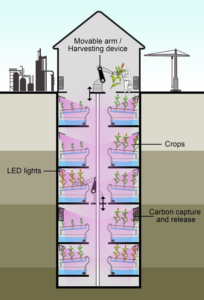 The deep farms could be created close to, or beneath, population centers to reduce transportation costs and CO2 emissions.

“A variety of crops could be grown in the deep farms using hydroponic planters (plant roots fed with nutrient-rich water) or aeroponics (growing plants in an air or mist environment),” said Riffat. “LED units would enable photosynthesis in the absence of sunlight. Groundwater could be used directly or water could be condensed from ambient air in hot/humid deserts. A major benefit of this approach is that crop production is largely unaffected by climatic or seasonal factors – one of the greatest limitations of conventional farming methods.”

Riffat says that many crops are now being grown in greenhouses, and while this provides a controllable growth environment, greenhouses are heavy energy consumers. Vertical farms are a relatively recent adaptation of the traditional greenhouse and are suitable for use in cities, as their tall glass structures provide high crop yields on a small land area.

However, above-ground vertical farming systems are expensive to manufacture and install, and they require a large amount of water and energy for heating and cooling. They are also vulnerable to extreme weather conditions, wars and terrorism.

Carbon dioxide (CO2) is required for plant photosynthesis and the deep farms will use CO2 capture and release systems, as these spaces are well suited to carbon storage.

Use of carbon capture systems has the added benefit of reducing CO2 concentration in the environment, as additional carbon is adsorbed in materials in the ground space. Advanced control systems including sensors and remote controls could be used to monitor crop production. Automated systems such as robots could be used for crop planting and harvesting. Electricity generated from renewable sources and off-peak power could be used to power the LED lighting for plant photosynthesis.

Deep farms would be fitted with LED lighting, water/nutrient spray units and CO2 carbon capture devices, which would enable crops to be grown using an aeroponic method, whereby water and nutrients are sprayed on the plant roots. Hydroponic methods could also be used for crop planting. In this case the plant’s roots can be placed in water and nutrient tanks. Crop harvesting would be carried out using an automated system of rotating/lift devices. The crops could be grown in the deep farm and harvested at the top of the shaft after 10 days or more depending on the type of crop planted.

Renewable energy could easily be used to power the growing system using both LED lighting and a solar concentrator combined with optical fiber lighting. Solar energy would be used during the day, and LEDs used at night or when solar radiation is low. This would reduce the farm’s energy requirement for lighting. The deep farm could be fully automated using a robot harvester that uses moveable arms/hands for planting and harvesting of crops. Hydroponics or aeroponics could be used as the planting methods.