With all the attention devoted to lithium ion batteries, limited lithium sources, and the scarcity and expense of precious metals needed for these batteries, such as cobalt, it’s refreshing to see the amount of work going on in paper-based batteries that may be appropriate for such widespread use as powering IoT devices.  The very idea of changing, collecting and recycling small metal batteries from industrial scale IoT devices is mind-boggling.

According to a new article from a team at the State University of New York Binghamton, paper-based batteries have recently emerged as a simple, biodegradable, and low‐cost paradigm for disposable electronics and may be an excellent way to reduce the dramatic increase in electronic waste. They argue that among a large amount of work on paper‐based batteries, “paper‐based microbial biobatteries attract significant attention because of their self‐sustainability, cost‐effectiveness, eco‐friendliness, and potential for energy accessibility in resource‐constrained settings.”

For years, there has been excitement in the scientific community about the possibility of paper-based batteries as an eco-friendly alternative. However, the proposed designs were never quite powerful enough, they were difficult to produce and it was questionable whether they were really biodegradable. However, to-date, low performance has been a barrier to the practical power applications of the technology. Additionally, the device biodegradability is still in question.

The new research results show that a novel high-performance microbial battery can be developed with the addition of an easily biodegradable paper‐polymer substrate. What’s more, it may be significantly more cost-effective. The polymer-paper structures are lightweight, low-cost and flexible. Choi said that flexibility also provides another benefit. “Power enhancement can be potentially achieved by simply folding or stacking the hybrid, flexible paper-polymer devices,” explained Choi.

The team is currently seeking industrial partners to advance and to commercialize the research. 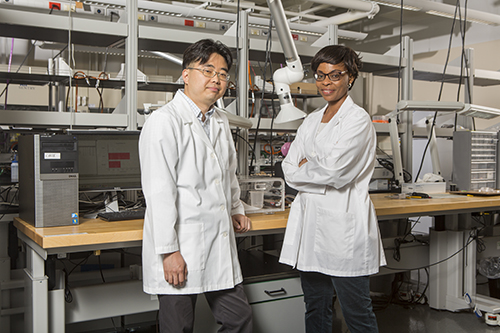 Topping it off, producing the biobatteries is a fairly straightforward process and the material allows for modifications depending on what configuration is needed.

The electrical functionality was generated by freeze-drying bacteria called “exoelectrogens,” a type of bacteria that can transfer electrons outside of their cells. When the bacteria are reactivated using water or saliva, electrons pass through the cell membrane and make contact with external electrodes to power the battery.

The biobattery uses a hybrid of paper and engineered polymers. The polymers – poly (amic) acid and poly (pyromellitic dianhydride-p-phenylenediamine) – were the key to giving the batteries biodegrading properties.

Associate Professor Seokheun “Sean” Choi from the Electrical and Computer Engineering Department and Professor Omowunmi Sadik from the Chemistry Department worked on the project together.

Choi engineered the design of the paper-based battery, while Sadik was able to make the battery a self-sustaining biobattery.

“There’s been a dramatic increase in electronic waste and this may be an excellent way to start reducing that,” said Choi. “Our hybrid paper battery exhibited a much higher power-to-cost ratio than all previously reported paper-based microbial batteries.”

The team tested the degradation of the battery in water and it clearly biodegraded without the requirements of special facilities, conditions or introduction of other microorganisms.

The amount of power generated is still relatively small — 4 microWatts per square centimeter at 26 microAmps per square centimeter. The researchers say that the power and density must be increased by a factor of about 1000 for commercial use. The bacteria currently enable a shelf life of about four months, which the team plans to increase also.

The work was supported by a grant from the National Science Foundation and done through the Center for Research in Advanced Sensing Technologies and Environmental Sustainability (CREATES).