Britain has always been a ship-building nation, and this century is no different. Except now there is a twist. There are no people on board. An autonomous wave-propelled boat called the AutoNaut has been developed by a UK start-up, with funding from the European Space Agency Business Incubation Centre (ESA BIC).

Interestingly, the self driving vessel is not a new concept. In 1895, Herman Linden, from the Zoological Station in Naples, Italy, patented a boat with fish-like fins on the bottom with a traditional hull. The new AutoNaut, however, is powered by wave foils that use energy from the natural movement of waves. Four keel-mounted foils, positioned on both ends of the craft, propel it through the water, and it leaves behind no ecological footprint: zero waste and zero emissions. 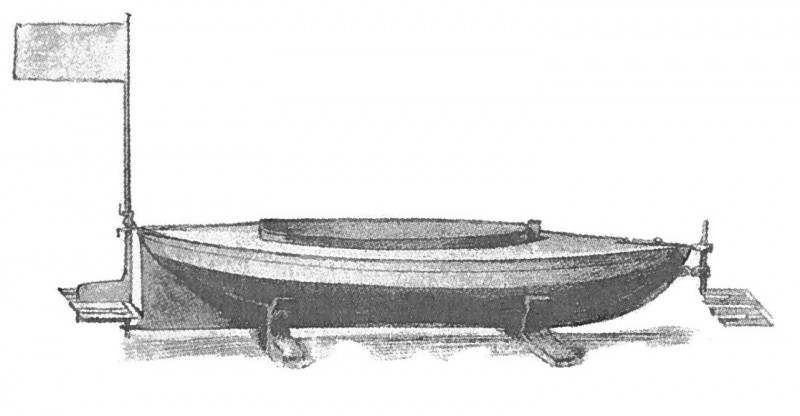 The original Autonaut, from circa 1895.

The foils are articulated and sprung for consistent performance, ensuring that the vessel can move forward in all wave directions. Speeds of 2-5.5km/h are maintained under most sea conditions and hydrodynamic testing has refined the technology with field-trials, proving its robustness in stormy seas.

It is one of the world’s first small commercial applications of wave propulsion and it can operate at sea for many weeks at a time, covering hundreds of kilometres per week in areas and conditions too hazardous for humans.

It is so quiet that it can measure the whistles and clicks of dolphins over large areas. Using satellite networks, the AutoNaut receives its instructions from anywhere in the world. It can carry cutting-edge, solar-powered sensors to capture raw measurements, process the data onboard and then send them back to the operators via satellite.

“If a satellite radar picks up suspected oil spills our AutoNaut can verify it on the spot, map the extent and take water measurements for relay back to shore,” said Phil Johnson of BIC.

The team recently completed its two-year incubation at the ESA BIC. There, they used highly specialised satellite navigation and communication systems to refine navigation and control capabilities, and deliver near-real time data collected from the sensors. Backed by ESA’s £41,500 grant and business support, Autonaut has already taken part in a number of missions with the Royal Navy, the National Oceanographic Centre, the UK Met Office, and offshore engineering industries.

“AutoNaut is revolutionary and will help us to better understand our environment at a fraction of the cost of manned technologies,” said company director David Maclean. “Our society and economy rely on accurate data sourced from our oceans on a consistent and non-interfering basis, and having access to the business support, technology and expertise has made a massive difference to us in our journey towards commercialising our product.”

Marlee Breunig is a West Coast writer with a degree in cultural anthropology and an interest in solar technologies and reducing our carbon footprint.