Chalk this one up to the accelerated growth of efficient solar technology. In Australia, a railroad company has restored a derelict heritage train to run completely on solar, repaired three kilometres of railway line and a bridge and reinvigorated and consequently preserved a section of an out-of-action rail corridor. Last week, the train began its initial runs, with an expanded schedule slated for January.

The project was undertaken to provide an affordable public transport solution for locals and visitors and to revitalize a key area of railway road bed for public use. All at no cost to ratepayers, at no cost to government at any level. The train, converted and operated by the Byron Bay Railroad Company, Ltd., operates on energy from the sun — solar panels on the train and on the train storage shed generate the equivalent amount of energy required to operate the train daily, charging the on-board battery bank.

The original intent was to get the train up and running as a diesel service prior to converting to solar power. However with the accelerated development of technology in this area it became technically feasible to convert the train prior to its first run in Byron Bay. The conversion was undertaken now at the Lithgow Railway Workshop.

In what is believed to be a first, the solar charged batteries are designed to operate all systems including traction power, lighting, control circuits and air compressors.

The custom designed curved solar panels on the roof of the train combined with the solar array on the storage shed roof generate sufficient energy to power the train. The regenerative (“regen”) braking system recovers around 25% of the spent energy each time the brakes are applied.

In the case of prolonged lack of sunshine the on-board batteries can be charged from the grid supply using 100% green energy from local community based energy retailer Enova Energy. Like a bank, BBRC’s arrays of solar panels will deposit energy and then withdraw when required.

This diagram outlines the solar conversion components and how the system works. 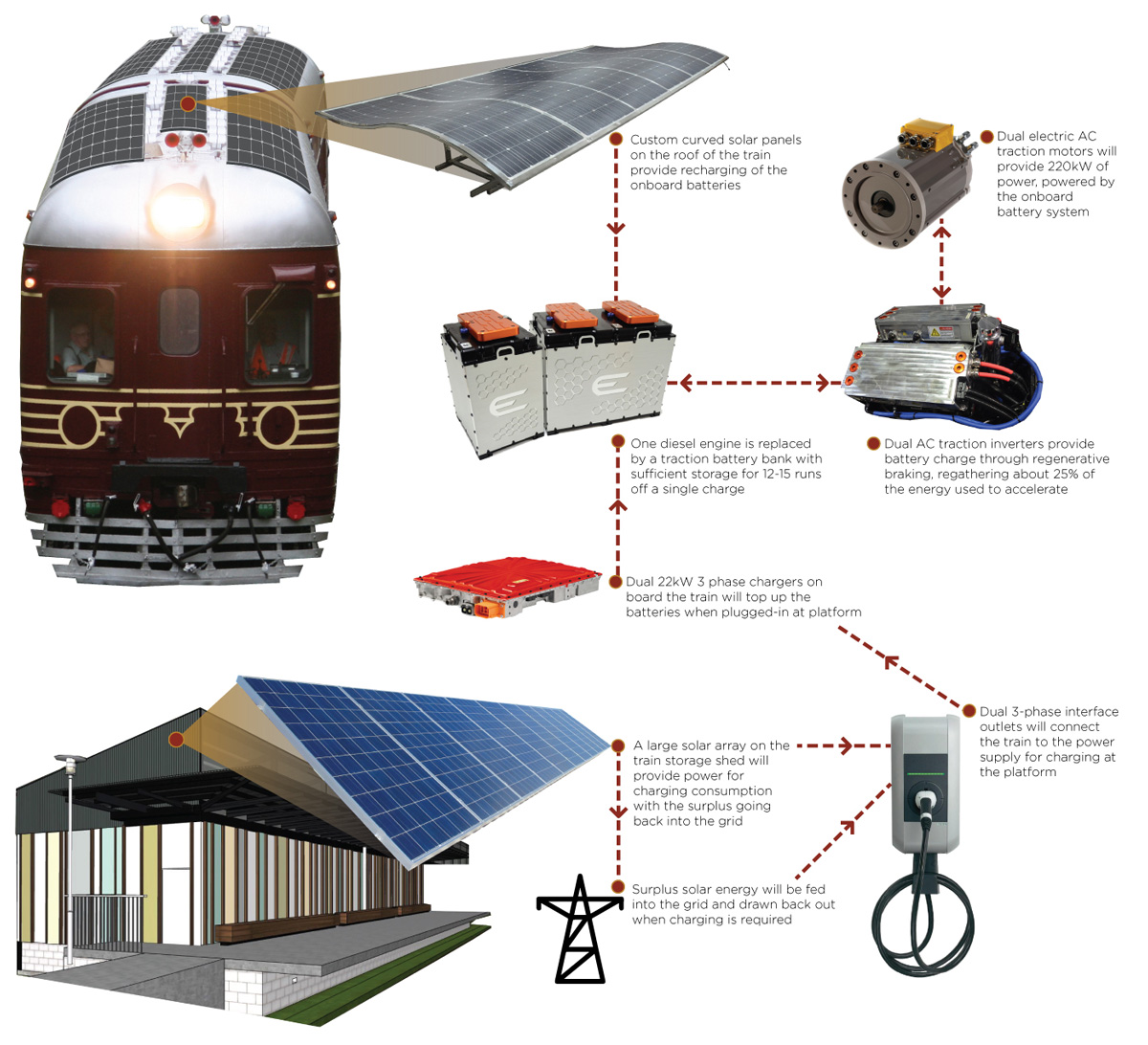 As backup, the train has been modified to have a single Cummins 14 litre NT855 diesel engine, which is renowned within the industry as a clean burning engine.

One of the two diesel engines has been removed and the other remains on board for weight and balance and also to provide an emergency back up in case of electrical fault. The remaining diesel engine is not required for normal operation, even in cases of prolonged lack of sunshine.

All Cummins engines are fitted with a turbo manifold pressure fuel limiter which limits the amount of fuel fed into the engine during acceleration until the turbo pressure increases. More oxygen than fuel is fed into the engine which ensures complete combustion and no unburnt fuel being emitted as black smoke.

The existing engine was fitted new to the train in the mid 1970s and during its 16 year operational life was upgraded numerous times. The engine is far more economical and gentler on the environment than when it was built 40 years ago. It has been fitted with exhaust emission controls which have been progressively updated over the years.

Due to the fact that the track is level with only one small curve, the train can run on a minimal amount of energy with the engine idle most of the time. During diesel operation, with a capacity of 100 seated passengers the train will use only 3.2 litres of fuel for the 6km return journey. This is less than a Sydney bus with a capacity of 50 seated passengers*. The vast majority of buses run on diesel fuel.

Restoring a Railway Corridor for the Public

Whilst Ewingsdale Road experiences traffic gridlock, the 120 year old 40 metre wide rail corridor running parallel to the Byron Coast has laid fallow for the past 13 years. BBRC is revitalising this historically significant railway line, making it once again a key transport corridor. With the support and generous contribution from Lithgow State Mine Railway, BBRC has fully restored to heritage status a train that had been out of action for twenty-five years, bringing it back to life. In addition BBRC has invested in excess of $1.5 million to restore the state owned railway infrastructure to its former standard suitable for operating trains.