Concept: The oil & gas industry isn’t going away any time soon, so let’s consider it a global opportunity for clean tech innovation.

To secure a sustainable future, and minimize the harmful effects of climate change, it’s becoming increasingly clear that we need to sharply reduce the burning of fossil fuels, fast. But even under the most optimistic projections, humanity is going to extract and process gigantic quantities of oil and gas for decades—currently a mind-boggling 34 billion barrels per year by one estimate. Extraction, transportation and refining create their own energy demands, environmental impact and byproducts.

The scale of this $1.7 trillion industry presents an enormous opportunity for companies developing clean technologies. But to change established practices in oil & gas companies, entrepreneurs can’t count on environmental sensitivity alone. They need to demonstrate how cleaner technologies can also save money or turn a profit.

One person is determined to show the way. 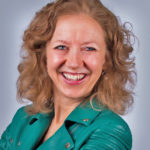 “There are so many clean tech technologies that are not applied in oil & gas,” says Suzanne West, CEO of Imaginea Energy. “Clean tech companies should look to the oil & gas world as an emerging market, and a global one.”

A veteran entrepreneur in the industry, West founded Imaginea Energy with the vision to revolutionize the oil & gas supply chain and deliver “clean hydrocarbons.” Now whether or not you accept that notion, Imaginea’s initial attempts to reduce the impact of oil production—and satisfy “people, profits and planet” —show the business potential for clean technology in oil & gas.

And the more clean technology that is deployed there, the better for us all.

First, solar, wind and other renewable energy sources can replace traditional power generation to run oil wells and production facilities. Many of these locations are remote, far from traditional energy sources, and with enough real estate to support substantial solar or wind assets. 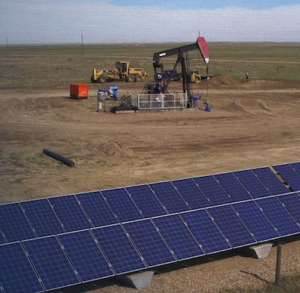 At two wellheads Imaginea has installed solar panels to provide electricity for the pumps that bring up the product. They replace electricity from Alberta’s electrical grid which is 41% powered by coal. The company estimates that the panels will reduce emissions from this part of the operation by 2,214 tonnes of CO2 over the expected life of the project. The solar panels also help reduce the cost to lift the oil by at least $1.70 per barrel. That’s bottom-line business impact, on top of lower emissions.

Extend this idea to offshore drilling operations. Why not put wind turbines on or near platforms to offset the need for gas turbines to generate electricity? Studies show that the idea makes economic sense. Take it a step further: retired oil & gas platforms could be converted to processing plants for “green” hydrogen for industrial and vehicular purposes. And with solar panels, retired wellheads in Canada could continue to generate clean power for Alberta’s energy grid.

Back on the prairie, Imaginea has also contracted with OOM Energy to operate a co-generation turbine to burn gas from one of its facilities on-site, creating a localized electricity source. If you accept the argument that burning gas has less impact than coal, then this is another step to reduce environmental impact. At the same time, electricity generated from its own gas is less expensive than grid-provided power.

Minimizing impact on the physical environment

Drilling and maintaining a wellhead scars the landscape. Agricultural clean technologies could minimize these effects.

Here’s one example: Alberta regulations require oil producers to fill in ruts from production equipment The industry typically uses gravel, produced and trucked in from miles away, to do this. Imaginea is now trialing the use of waste product from local hemp farms instead. “About 90% of hemp material ends up as waste, and the stalks are remarkably durable,” West explains. Using hemp waste as fill diverts this material from the landfill. While not as durable as gravel, as it degrades, it does not have any negative impact to the quality of the soil. Not coincidentally, it will save the company money compared to using gravel.

Imaginea is also supporting research into more complex ag tech. It is partnering with University of Calgary to explore how rhizobacteria, a naturally occurring organism in the soils, can offset the impact of oil in the environment. The researchers remove the bacteria from the soil, grow them in additives to make them more robust, and redeploy them back into the soil. The goal is to show that the treated rhizobacteria help the plants to remain healthy and vital in contaminated soil.

Becoming a source of water

A third area of clean tech opportunity is treating byproducts of the production process. Consider that many oil wells bring up oil that is mixed with water, as the underground reservoirs often contain both oil and water. “Water is about 98% of the total output from reservoirs like ours,” says West. “We bring up about 200,000 barrels of water a day. We are currently looking to use reverse osmosis technology to make it clean enough for irrigation.” Waste water becomes a useful resource instead of a polluted material to manage. Longer term, it is possible to clean the water even more, creating a local water source for nearby towns and industries.

For another example of wastewater treatment in oil & gas production, see this article Targeting that Fracking Wastewater.

Taken together, these examples show that there is no magic bullet to eliminating the environmental impacts of the oil & gas industry. Given its scale, the answer lies in continuously applying a thousand innovations to many different processes—a global opportunity for entrepreneurs.

To nudge new ideas into the field, Imaginea has spun out an investment arm, called the ImagineaXL Technology Accelerator, to incubate new technologies. In addition to staged funding, ImagineaXL offers to move clean tech into field demonstration sites and commercialization faster, with Imaginea as the first adopter. And in line with its goal to revolutionize the oil & gas industry, Imaginea will “open-source” the accelerator technologies to help speed their adoption.

Clean tech companies should look to the oil & gas world as an emerging market, and a global one. – Suzanne West, CEO of Imaginea Energy

Over time, West believes that the myriad improvements will result in a profitable business that meets these ambitious goals:

It’s going to take a lot of innovation and investment to hit those goals. But West is showing how much is possible by bringing clean tech to an industry that is in desperate need of new thinking. Is this an opportunity for your clean technology? “Then just call me,” says West.

Editor’s Update, April 2018: We are saddened to note that the subject of this piece, Suzanne West, died in March 2018 of an aggressive cancer. Imaginea is under new management, focusing on the how artificial intelligence and data analysis can improve the industry.