Regardless of how we feel about the issue, economic and policy forces dictate that hydrocarbon fuels will most likely be with us for at least the near term-future. Research teams and the energy industry are now specifically thinking about how to mitigate — at minimum — the effects of hydrocarbon production as well as other chemicals. Part of the solution may lie in synthetically produced hydrocarbon fuels and byproducts that can be manufactured using renewable energy and resources on a central or distributed model.

In one solution in Finland, a research team has developed a modular plant pilot project that takes CO2 from the air to create hydrocarbon based fuels and additional chemicals — without the need for extraction, transport and refining of crude oil or natural gas.

The aim of the project is to demonstrate the technical performance of the overall process and produce 200 litres of fuels and other hydrocarbons for research purposes. This concerns a one-of-a-kind demo plant in which the entire process chain, from solar power generation to hydrocarbon production, is in the same place.

Pilot-scale plant units have been designed for distributed, small-scale production. Production capacity can be increased by adding more units. 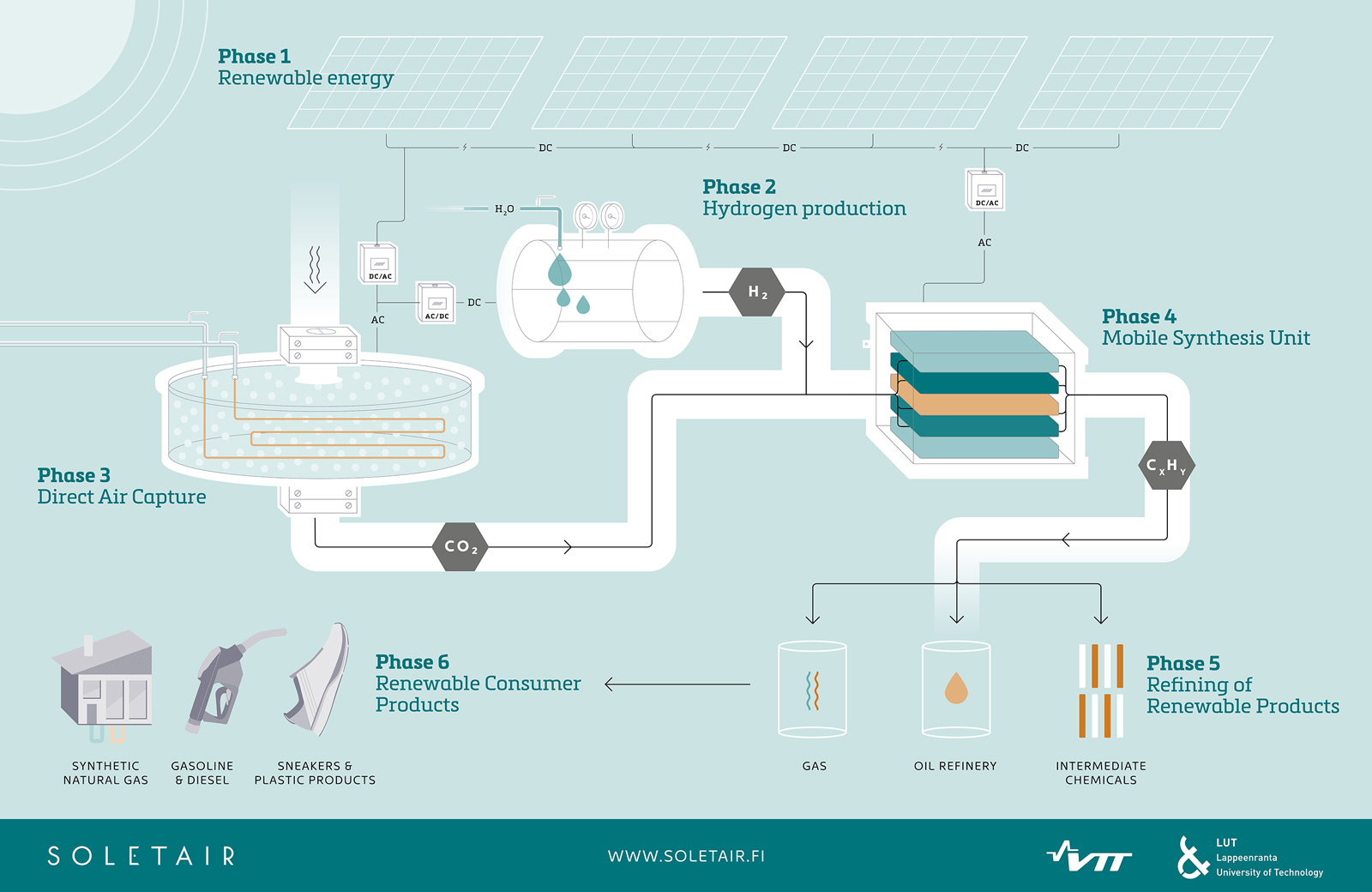 “The concept we are exploring is an example of how the chemical industry could be electrified in the future. The burning of fossil fuels must end by 2050, but people will continue to need some hydrocarbons,” said Professor Jero Ahola of LUT.

“The result will be multi-sectoral industrial integration. Finnish industry’s expertise in this area is being reinforced by collaboration,” said Principal Scientist Pekka Simell of VTT, who is in charge of coordinating the project.

VTT and LUT will test the Soletair demo plant during the summer months from May to September. After the piloting phase, synthesis units will be used in a number of EU projects over the coming years. It will provide a platform for conducting research with international companies.

Information gathered during the project will be useful for the commercialization of the technologies. New business opportunities will arise for companies such as those benefiting from the carbon circular economy or surplus electricity, or for chemical companies.

VTT and LUT have invested one million euros in the equipment. The research is being funded by Tekes and a number of companies: ABB, ENE Solar Systems, Green Energy Finland, Proventia, Hydrocell, Ineratec, Woikoski, Gasum and the Finnish Transport Safety Agency (Trafi).