The concept: plug a modular battery system into a light car, then network it all to give urban fleets non-stop range and opportunity.

Not all EV start-ups start out building a supercar. In Germany, Adaptive City Mobility is developing a relatively simple electric vehicle called the eTaxi for urban uses: not just taxis, but also car sharing, logistics and tourism. And unlike the SUV chassis favored by many established car companies, eTaxi has targeted a lightweight vehicle class (the European vehicle category of L7e, like the Renault Twizy) that fits between cars and motorcycles. Not surprisingly, the company’s unofficial motto is “less is more.”

Here’s the trick: the eTaxi is powered by swappable Li-Ion battery packs that are accessible in shelves at the bottom of the chassis on both sides of the car (see right side of image below). Each battery pack weighs about 10kg, for a total of 80kg of battery in the vehicle (by comparison, the Nissan Leaf battery pack weighs about 218kg). It is a matter of minutes to remove the batteries, insert them in a charging station and swap in fully charged replacements.

The idea of replaceable batteries has been around since the dawn of EVs. It suffered a black eye during the high-profile failure of Shai Agassi’s Better Place. But ACM has found a more practical path. Make it easy to swap the batteries by hand. Build a light vehicle for solely urban use. Focus on fleets. And deliver the software and network to help operators get the full value of both its fleet of vehicles and its swarm of batteries. There are many new concepts at play here:

While Better Place promised an end to range anxiety, a large network of robot-activated battery swapping stations proved too costly and complicated to build. In addition, its 15-minute battery-swap time was still noticeably longer than filling a tank of gas. The manual job of replacing the six batteries in the eTaxi promises to be a quicker and simpler, with little automation to build and maintain. Charging time in the battery charging station will be three hours; it will also be possible to charge them through an adapter to a wall socket in six hours.

ACM reimagined the kind of car best suited for daily urban chores. The eTaxi is a three-seater—driver up front and two passengers behind—enclosed in a protective frame that can carry a “backpack” to serve as a trunk. Plexiglass doors give the passengers and driver clear views of the streets, which makes taxis and tours that much more fun. In all, the eTaxi weighs just 450kg (plus 100kg for the battery system) and yet can carry 380 kg of people and cargo. It achieves a top speed of 90 km/hr, and should run for up to 160 km on a charge. 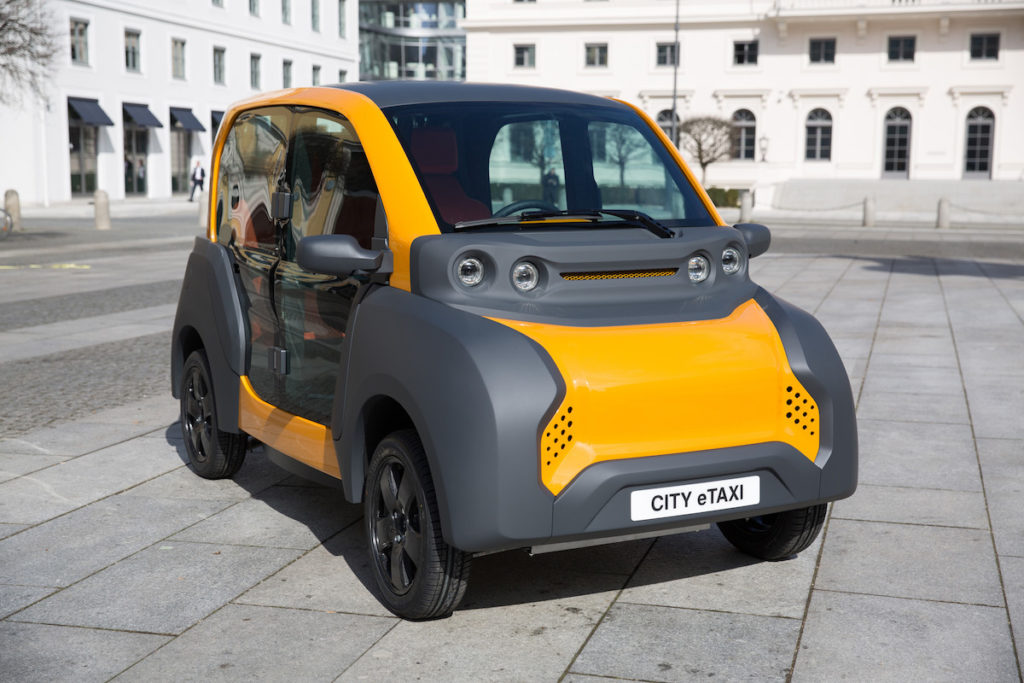 With those speed and distance ranges, the eTaxi is no Tesla. But that’s the point: it is a better match for urban fleets that are looking for simplicity, low cost and dispatch from a central location. Yet the fast battery-swap time can give eTaxis a practically unlimited range within a fixed geography. A taxi service could deploy a number of eTaxis from one location with a handful of charging stations, gas-free. Resorts and hotels could similarly move guests and tourists about quickly and quietly. Governments and academic institutions could meet environmental goals and transportation needs by adopting them. To ice the cake, the backpack can also include signage boards using e-ink technology under real-time control, providing another source of revenue.

ACM is busy completing its cloud-based software and networking to allow centralized monitoring and control of not only the eTaxis but also the batteries. This provides considerable flexibility for planning and optimizing the use of all assets. ACM also plans to build in end-user access via mobile phones, to make it easy to build public-facing applications with the eTaxi.

The ACM project brings its own infrastructure with it and works [around] the high investment costs of electric mobility as an autonomous system. – initiator & overall project manager Paul Leibold

ACM is pioneering a MultiMode software capability, through which an operator can switch an eTaxi among different applications “such as eTaxi, eSharing, eLogistics and eTourism,” according to initiator & overall project manager Paul Leibold. “You can switch the mode whenever you want. The billing process is adapted to these different modes. In this way the eTaxi can be used 24/7, which helps to increase utilization and efficiency of the whole fleet, and also reduce traffic density.”

Fill ‘er up with solar

One obstacle to the use of EVs in emerging markets is the unpredictability of grid services. How can a delivery fleet commit to EVs when the electricity may cut out unexpectedly, for who knows how long? According to Leibold, ACM is planning to show at the IAA in September how it will combine solar power with its battery charging system to solve this problem, opening up fleet EV opportunities in urban megacenters across Europe and Asia.

It’s not a leap to see how the batteries, charging system and solar can do more than just power EVs. With enough batteries in rotation, the ACM solution could operate as a back-up system for other business needs, and as an asset to the grid—much as utilities are hoping mainstream EVs will do in the future. Becoming a grid resource fires up new opportunities for revenue as utilities figure out how to integrate energy storage. I expect to see that capability as another milestone in ACM’s product roadmap.

By separating the batteries and the vehicle, ACM has made it easier to evolve both: adopt new power battery technology, and revise its vehicle lineup to suit new uses. Customers could introduce advanced batteries into operations over time, working in parallel with the current generation. They could also add new vehicles types that use their current stock of batteries.

With all these new concepts, ACM predicts that the eTaxi, software and networking can drive down total operating costs (or TCO) for EV fleets. In a press release, Leibold said “The ACM project brings its own infrastructure with it and works [around] the high investment costs of electric mobility as an autonomous system.”

Adaptive City Mobility is a joint project of the ICT for electromobility III program and is sponsored by the German Federal Ministry of Economics and Energy.  The partners involved in the project are Ametras rentconcept, the battery assembly center BMZ, EuroDesign, Fraunhofer ESK, Green City Project, PEM of RWTH Aachen University, Plexiweiss, Roding Automobile, Siemens and StreetScooter.