We don’t usually think about our residential and industrial water system infrastructure. Pipes are not sexy — we think of earth movers and large concrete segments. But pipes contain a untouched gold mine: potential energy from the gravity-fed water.

Up until now this energy has gone untapped. However, a innovative Portland, Oregon-based company, Lucid Energy, has developed a way to capture this energy that has previously gone to waste. Their pipes contain turbines, which can harvest energy from large water lines.The lift based spherical turbines operate with minimal disruption to the flow making them nearly invisible in the pipeline. 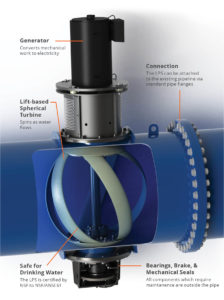 The technique offers a way to collect sustainable energy almost 24/7. So far, Lucid has installed four sections of pipe in Portland and one in Riverside, California. The pipes can carry water as long as it doesn’t have too much particulate matter that could cause the seals on the pipes to wear out prematurely. Most raw and potable water is suitable for energy generation. Although the company faces a few obstacles, the potential for their product is broad.

Most pipes now use valves to release pressure when build-up is too high, but Lucid’s turbines provide a solution for that. The turbines convert excess pressure into energy; killing two birds with one stone. The valves no longer have to work as hard and therefore sap less energy. The pressure within the pipes is dependent upon several factors. Many of the pipes that can be used transfer water from reservoirs. The health of the reservoir, based on the annual rainfall, can affect the pressure due to lack of water. Additionally, the elevation change for the pipes affects how much pressure gravity can create. The last factor is demand for water. This is seasonal, as people require more water during the summer and less in the winter. 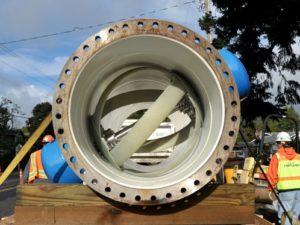 built to be able to maximize the energy no matter what the flow is. This is probably one of the most difficult parts to design because of the many parameters that constantly change as the flow and pressure in the pipes varies.  The Director of Engineering at Lucid, Ron Peters, said that the controls system are essential to getting as much energy out of the water as possible.

Lucid Energy has received a large influx of attention on social media, but still faces several challenges. “Fear is our biggest obstacle,” says Peters. The company has received requests from all over the world including Johannesburg and Boston, but both backed out of the deals. Boston was planning to replace the main pipe that brought water to the city. The pipe is about 9 feet in diameter, which could produce a huge amount of power as it is under constant demand. However, the city feared that if anything were to go wrong, their water supply would be cut off. They are not alone, but so far Lucid’s past installations have been successful. The design of the pipes also allows for all maintenance without taking apart the pipe or stopping the flow of water.

They have received several grants, both large and small. The larger ones included a Small Business Innovation Research (SBIR) award for $1.2 million and another from the Department of Energy for $1.5 million. They are looking for more investors and grant money so that they can continue to make the pipes more efficient and install more systems. A big difference between Lucid’s idea and other hydro energy sources is that Lucid’s system doesn’t change the water’s delivery efficiency and has no environmental impact. They can also run around the clock, which can’t be said for solar or wind energy. It is much more cost effective than other forms of sustainable energy as well. With many energy alternatives to Lucid, it can be hard to stand out, but as the demand for clean energy continues to rise, their inpipe system is gaining attention.

Looking towards the future, Lucid is hoping to improve the cost and efficiency of their systems. “Finding locations that do pipe retrofit or refurbishment would be an ideal case for us,” says Peters, because retrofitting of old pipes is one way for the cost of installation to be brought down. In regards to efficiency, they have three focal points that they are working on. The first is the flow of water, because more water means more energy. The second is blade mechanics in order to optimize the pressure extraction at the most efficient operating speeds. Lastly, they are working on the control system. The control system is key to maximizing energy across the wide operating ranges that typical water transmission lines see. Lucid will continue to get more and more attention as the potential for their unique pipes is demonstrated.