A research team at UNIST (Korea) has succeeded in developing a technique that can be used to turn industrial waste heat into electricity for vehicles and other applications.

The team, led by Professor Jae Sung Son of the Material Science and Engineering Department, worked with high-performance thermoelectric (TE) materials that possess liquid-like properties. These newly developed materials allow engineering of shapes and are geometrically compatible in that they can be directly brush-painted on almost any surface.

Using this technique enables electrical power to be generated via the application of TE paints on the exterior surfaces of buildings, roofs, and cars. The scientists hope that their findings, described in the journal Nature Communications this week, will pave the way for design of materials and devices that can be easily transferred to other applications.

The thermoelectric effect is the direct conversion of temperature differences to electric voltage and vice versa. This effect can be used either for heating or for cooling, such as in small cooling systems, automotive cooling systems, as well as waste heat recovery system for ships. In addition, the thermoelectric generator modules used in these devices are configured as rectangular parallelepipeds.

The output power of thermoelectric generators depends on device engineering to minimize heat loss, as well as on inherent material properties. According to the research team, the currently existing liquid-like TE materials have been largely neglected due to the limited flat or angular shape of devices. 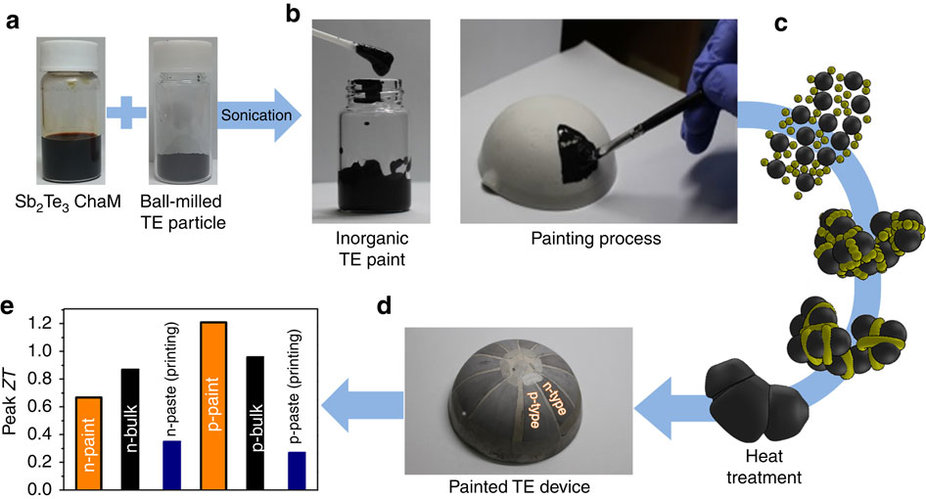 However, considering that the surface of most heat sources where these planar devices are attached is curved, a considerable amount of heat loss is inevitable. To address this issue, the research team used the thermoelectric painting technique where they they directly brush TE paints onto the surface of heat sources to produce electricity.

To show the feasibility of the currently proposed technology, they also fabricated TE generators through painting TE paints on flat, curved and large-sized hemispherical substrates, demonstrating that the paint is the most effective means of heat energy collection from any heat sources with exceedingly high output power density of 4.0 mW cm2: the best value among the reported printed TE generators.

“Our thermoelectric material can be applied to any heat source regardless of its shape, type and size.” said Professor Son. “It will place itself as a new type of renewable energy generating system.”