New research points the way towards perovskite solar modules that are highly efficient to manufacture, and approaching the efficiency of crystalline silicon photovoltaics.

At the PSCO international conference in Genova, researchers from KIT, ZSW, and the Belgian research institute imec present a tandem thin-film solar module using perovskite and CIGS (Copper Indium Gallium Selenide) structures. The semitransparent upper perovskite solar module absorbs the high-energy portion of the solar spectrum, and the lower CIGS (Copper Indium Gallium Selenide) layer converts the infrared energy. In total, the prototype achieves an energy conversion efficiency of 17.8 percent. For comparison, the current world record for perovskite modules on this scale is at 15.3 percent, and the reference CIGS solar module has an efficiency of 15.7 percent, according to the researchers.

Dr. Ulrich W. Paetzold of KIT leads the group at KIT’s Institute of Microstructure Technology and Institute of Light Technology that is investigating and optimizing light trapping and energy efficiency in tandem solar modules.

Interest is high in tandem devices because thin-film technologies have the potential to dramatically reduce the cost of solar module manufacturing. But to date, their power conversion efficiencies have lagged far behind the traditional silicon-based PVs. But the combination of complementary absorber materials in a tandem solar module is proving to increase efficiency, and allowing industrial scaling up to modules measuring several square meters.

Work on tandem perovskite solar devices continues apace all over the worlds. Consider this recent paper from a team of researchers spanning Stanford University, MIT, École Polytechnique Fédérale de Lausanne, and NREL. This team uses a transparent silver nanowire electrode on perovskite solar cells to achieve a semi-transparent device, which is then stacked CIGS and low-quality multi-crystalline silicon (Si). According to the authors, this approach may lead to perovskites tandem cells with efficiency of 25% or greater. 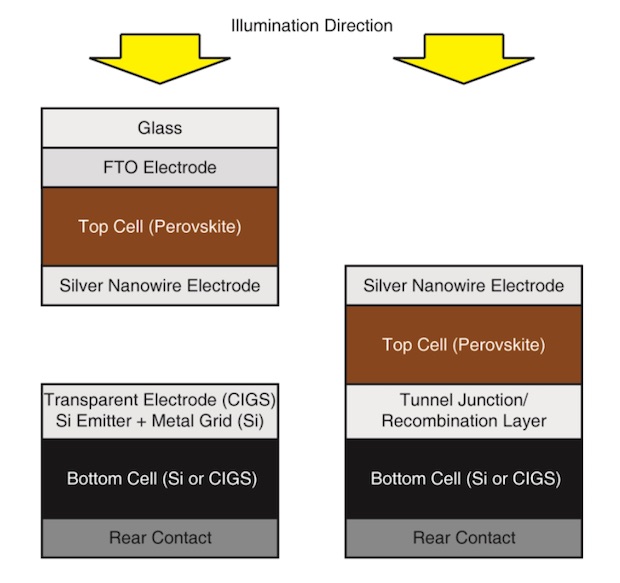 Perovskite-based solar cells were first tested in 2012, and were so successful that in 2013, Science Magazine rated them one of the breakthroughs of the year. Since then, researchers have made rapid progress in improving the efficiency with which these cells convert light into electrical energy.

Cleantech Concepts covered a Department of energy announcement in August funding for more research into combinations of materials to boost perovskite. Back in March, we explained how researchers were using hybrid lead halide perovskites that enhance the effect of photon recycling to boost energy efficiency