It sounds too good to be true: capture carbon dioxide from the air and convert it into fuel.

Yet researchers at the U.S. Department of Energy’s Oak Ridge National Laboratory (ORNL) have discovered an efficient, scalable chemical process that converts CO2 into ethanol.

They made this discovery when studying nanofabrication and catalysis science reactions. They were applying voltages to a catalyst comprised of carbon, copper and nitrogen: configurations called carbon “nanospikes” and sphere-shaped copper nanoparticles. This combination caused a solution of carbon dioxide dissolved in water to transform into a liquid with a 63 percent yield of ethanol.

ONRL has studied other catalysts for the creation of ethanol, but they included the use of rare and expensive metals such as platinum. The relatively cost-effective mix of copper, nitrogen and carbon holds the promise for scaling to real-world applications. 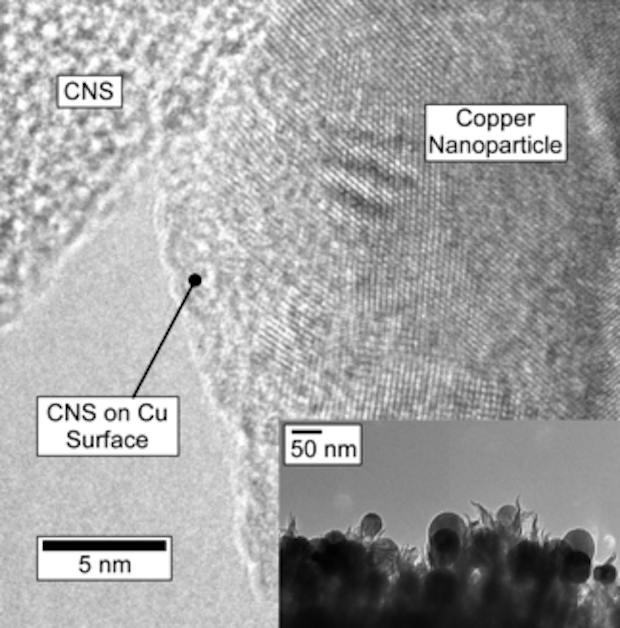 The carbon nanospike electrode is a dense nanotextured carbon film terminated by randomly oriented nanospikes approximately 50–80nm long. Each nanospike consists of layers of puckered carbon ending in a 2nm wide curled tip. The film is grown by a relatively simple direct-current plasma-enhanced chemical vapor deposition reaction using acetylene and ammonia as reagents. According to the researchers, the film grows quickly and adheres well to highly-doped silicon wafers that were used for this study.

Also, this carbon dioxide conversion technology works at room temperature, which lowers energy and deployment costs. The outcome would be a far more efficient process than generating fuel from other sources such as hydrogen.

“Closing the carbon cycle by utilizing CO2 as a feedstock for currently used commodities, in order to displace a fossil feedstock, is an appropriate intermediate step towards a carbon-free future,” the researchers concluded.