Siemens has an answer to the problem of excess wind energy: bury it.

The Future Energy Solution (FES) research project converts excess wind energy to heat in rock fill, where it is stored and protected with an insulated cover. When there is a need for additional electricity, a steam turbine converts the heat energy back to electricity. 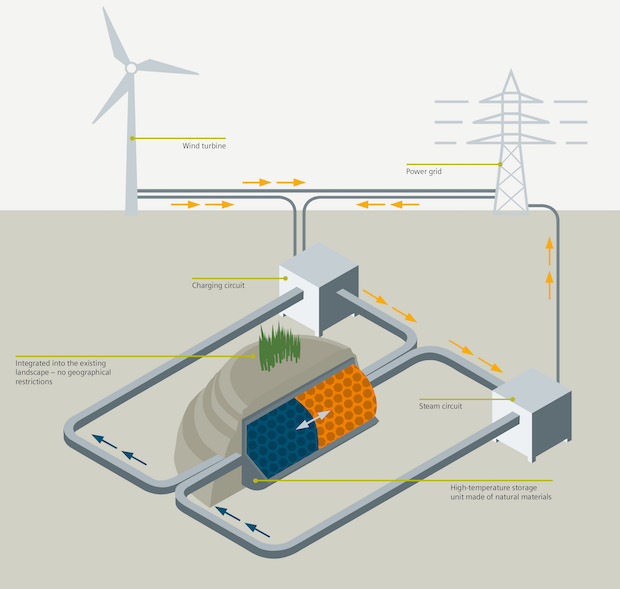 The researchers are testing the energy store at temperatures over 600 degrees C. To store power, it blows electrically-heated air to heat the stones to the target temperature. When discharging, the hot stones heat the air current, which then heats a steam boiler connected to a steam turbine and generator.

This kind of utility-scale storage may play a big role in Germany’s plans to expand renewable energy. First, the FES facility can release energy when the wind isn’t blowing, helping to offset the variable nature of the wind power.

Just as importantly, it can siphon off excess energy that has sometimes overwhelmed Germany’s energy grid. In those cases, Germany has had two choices: one, sell the excess power cheaply to other nations where “it plays havoc with local networks and impedes those countries from building up their own sustainable systems”, according to an article in the Guardian. The other unwanted option is to simply ask the energy companies to turn off their turbines.

This situation is so serious that the German government has had to cut its target for expanding wind energy because “it cannot extend its power grid quickly enough to the energy-hungry south…the step will deal a blow to the country’s reputation as a leader in green energy.”

For these reasons, energy storage like this is crucial to Germany’s plans to expand renewable energy sources and ramp down nuclear power. The FES project’s simple design suggest that it may be able to store and release energy very economically.

“We are working here with tested thermal components and a series-ready steam turbine, we will be able to offer a practical solution within a few years” – Till Barmeier, Siemens

The project currently tests the thermal requirements for the storage process, so no reverse current has yet been generated. However, Siemens plans to test the complete energy cycle in spring 2017: from electricity to heat storage and back to electricity.

“The technology of our FES store deliberately uses mainly tried and trusted technology,” says Till Barmeier, Siemens’ project manager in the company’s press release. “Because we are working here with tested thermal components and a series-ready steam turbine, we will be able to offer a practical solution within a few years.”

The FES which is being developed in Hamburg, is a joint project between Siemens, Technical University Hamburg Harburg (TUHH) and utility company Hamburg Energie. It has received research funding from the German Federal Ministry for Economic Affairs and Energy.