Let’s face it, despite the growing strength of the renewables industry, central power plants are going to be with us for the foreseeable future. Until we can reduce costs and increase reliability of energy supply through a more distributed network, utilities and power plants will be needed to provide the heavy lifting in our energy-hungry society.

So how can we begin to persuade utilities to migrate towards lower emissions goals and renewable energy implementation? Pacific Northwest National Laboratories (PNNL) examined this challenge and developed an intermediate technology with a strong business incentive that can help power plant operators reach the next level with minimal investment.

The reactor and heat exchangers have narrow channels that are only as wide as six dimes stacked on top of each other. Concentrated sunlight heats up the natural gas flowing through the reactor’s channels, which hold a catalyst that helps turn natural gas into syngas.  The heat exchangers’ channels help recycle heat left over from the chemical reaction gas. By reusing the heat, solar energy is used more efficiently to convert natural gas into syngas.  STARS has set a world record with 69% of the solar energy that hit the system’s mirrored dish converted into chemical energy contained in the syngas. 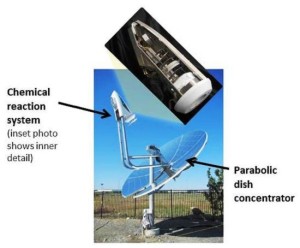 While many in the renewables industry would prefer to leapfrog past fossil fuels — including natural gas, the system offers a number of advantages, not the least of which are the ease of deployment, low cost, scalability and high efficiency.

First of all, the system is dual-purpose. Using natural gas or biomethane as a feedstock, STARS produces syngas that can be used to make electricity and, potentially, to produce synthetic transportation fuels, such as hydrogen, synthetic crude oil, or methanol.

The system’s modularity makes it highly scalable.  STARS can be installed at virtually any scale, from one unit to thousands, offering the ability to avoid large up-front capital costs by ramping up slowly while still deriving ROI and carbon savings.

Efficiency is a major benefit. By using the most efficient type of solar concentrator, the mirrored parabolic dish, STARS offers nearly 70% solar-to-chemical energy conversion.  By converting solar energy into chemical energy rather than thermal energy, the system can be coupled with highly efficient, low-cost, combined-cycle power generation technology and obtain higher levels of efficiency in producing electricity than either solar or natural gas plants alone. 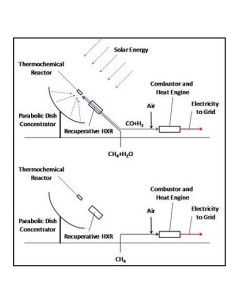