We know that retailers want our data, but they also want to know where we are, what we do in their stores, and how they can better direct us to our preferred products, especially in those big box stores. Whether you agree with the premise or not, retailers are already heading this direction, with GPS and other technology including facial recognition systems.

At least they can be energy-efficient in the process. Researchers from the University of South Australia have developed a “GPS-like” indoor positioning system using LEDs that tracks movement with far greater accuracy than contemporary RFID and Wi-Fi based systems. Besides retail use, the application could be useful in museums and facilities that care for the elderly.

Developer Siu Wai Ho said the system, called LiPo, used the light from energy efficient LED bulbs to triangulate a person’s location within a building to within centimeters.

He said other methods of indoor positioning such as Wi-Fi were only accurate to within 1-2 metres and were easily hampered by radio frequencies from nearby devices, power sources or other wireless electronics. Phillips has developed a similar technology with an accuracy of half a meter that it has deployed at a Carrefour shopping center in Lille, France. The Phillips application has cut energy consumption in half at the location.

“Our system is more accurate with an error margin of 10cm and unlike some positioning systems our algorithm can calculate the orientation at the same time,” Dr Ho said. LiPo uses LED lights as transmitters and photodetectors as receivers because they are both common items in modern societies and can be highly energy-efficient.

Photodetectors are a key component for capturing light and are also commonly found in smart phone cameras. The system uses a specially designed receiver (right) to measure light intensity that is able to calculate position and orientation.

Dr Ho said although it currently required a unique receiver, he hoped to integrate the technology with the photodetectors in mobile phones.

He said the system would be ideal for supermarkets because it allowed them to provide customers with relevant information about items nearby. “They can use the system to put advertisements to the users depending on their location,” Dr. Ho said. “If you are in a supermarket you want to see some information for a product in front of you. One or two meters of error is still too big because it maybe gives you a product you are not in front of. Our orientation is very accurate and robust – within five degrees of error. It doesn’t depend so much on environmental changes.” 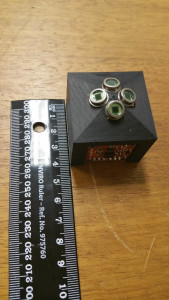 The system uses a specially designed receiver to measure light intensity that is able to calculate position and orientation.

LiPo’s unique algorithm also removes the need for a server to control the LED lights, which would store and track a user’s movements. It uses a closed form solution, allowing it to calculate the light intensity in 0.01 seconds.

Dr Ho said there were many more applications for the technology such as the identification of objects or machinery in factories, movement aid tools for the elderly and trackers for museums to provide relevant information to tourists as they passed by exhibits.

“An indoor positioning system has so many potential applications that still can’t be imagined but only after you build the system you can come up with more applications out of it,” he said.

“At this moment we have developed a prototype of the system. We are contacting different industries and some of them have seen our demonstration before – we are still discussing how we can collaborate and commercialise. Our plan is to have the product ready in 2017 but we are still negotiating.”