California’s drought has led the state to accelerate the construction of desalination plants; however, reclaiming seawater is a prohibitively expensive and energy-intensive prospect, unlikely to play a large role in America’s water supplies anytime soon. Now, an MIT team has developed a novel graphene filter that could greatly improve the efficiency of the purification process, and reduce other costs as well.

Graphene, a broadly useful material made from an atom-thick slice of graphite, is stronger than steel and has unique sieving properties. Jeffrey Grossman, a professor at MIT’s Department of Materials Science and Engineering, led a study to explore how it may be used to replace the polyamide plastic filters that have been used in the last 50 years of seawater desalination projects.

Seawater pumped through a graphene filter encounters far less friction than when using traditional filter materials. In an MIT press release, Grossman announced that “we have shown that perforated graphene filters can handle the water pressures of desalination plants while offering hundreds of times better permeability. The process of pumping seawater through filters represents about half the operating costs of a desalination plant. With graphene, we could use 15 percent less energy for seawater and up to 50 percent less energy for brackish water.” 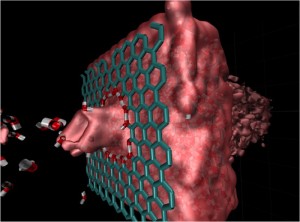 First isolated in 2003, graphene has different electrical, optical, and mechanical properties than graphite. It’s stronger than steel, and it has unique sieving properties. At only an atom thick, there’s far less friction loss when you push seawater through a perforated graphene filter compared with the polyamide plastic filters that have been used for the last 50 years. Photo credit: MIT/The Grossman Group.

Additionally, graphene filters do not become fouled from bio-growth, a problem which requires frequent cleaning, and are resistant to the damaging effects of the chlorine used to clean the filters.

While Grossman states that it would be easy to replace polyamide filters with graphene in existing plants, significant challenges remain in manufacturing large volumes of graphene at a comparable cost. His team is taking a new approach to producing graphene, in which low-temperature chemistry breaks a ‘chunk’ of graphite in solution into sheets, cheaply and quickly.

Another main challenge is designing graphene membranes with the specific pore size that blocks salt but lets water molecules pass through. Desalination is possible because salt ions, when diffused in water, bond with water molecules and create a larger entity. But the difference in size compared to a free water molecule is still quite small: the challenge is to find the sweet spot of about 0.8 nanometers, which is smaller than has ever been made in a controllable way with any other material. Too big and both water and salt pass through; too small and nothing gets through.

Several techniques may prove viable for making graphene membranes with such specific porosity, using chemical and thermal energy rather than mechanical processes: making the holes too big and then filling them in; making the holes exactly the right size; and carefully puncturing holes in a hole-less material.

The team continues to work on the challenge of manufacturing and perforating the graphene sheets, which Grossman suggests will debut in plants that clean brackish water found in estuaries. “Higher permeability would make a bigger difference with brackish water than with seawater. You lower the energy consumption in both cases, but more so for brackish water,” he said. Graphene filters could also enable the construction of smaller, cheaper plants, by offering more choices in operation processes.

When faced with the enormously pressing problems regarding energy and water resources such as the billions of people who lack regular access to clean water, a figure expected to double in the next 25 years, the solution may lie in developing new materials such as these.