The solar energy hitting Earth each year exceeds the total energy consumed by humanity by more than 20,000 times, says Dr. Nicolas Calvet, an assistant professor of mechanical and materials engineering at the Masdar Institute in the United Arab Emirates who leads its thermal energy storage group.

However, the question is how to capture, store and harness this plentiful source of power. Under Calvet’s guidance, the Masdar Institute is looking at capturing and storing solar thermal energy using a medium that is in plentiful supply in the UAE – sand. The researchers have already successfully demonstrated that desert sand from the UAE could be used in concentrated solar power (CSP) facilities to store thermal energy at up to 1000°C.

The research project, called ‘Sandstock,’ has been seeking to develop a sustainable and low-cost gravity-fed solar receiver and storage system, using sand particles as the heat collector, heat transfer and thermal energy storage mechanism.  Desert sand from the UAE can now be considered a possible thermal energy storage (TES) material. Its thermal stability, specific heat capacity, and tendency to agglomerate have been studied at high temperatures.

Sand was chosen for its many properties – it is cheap, available everywhere in UAE and it can store thermal energy at a higher temperature of 1000°C compared to molten salts, which can only store energy at 600°C. Molten salts have been used to store thermal energy since the 1980s. At a CSP facility, the focused solar reflectors typically heat molten nitrate salts in a central tower. The heat from the salts creates steam that powers a turbine, which generates electricity.

The scientists at the Masdar Institute believe that sand offers a superior, cost-effective and sustainable alternative to the molten salt system for the next generation of CSP plants, an alternative that also simplifies the process. The sand heated by the CSP will do away with certain infrastructure needs, including heat transfer fluids, pumps and pipes, resulting in a significant reduction in operation cost.

Dr.  Calvet, said: “The availability of this material in desert environments such as the UAE allows for significant cost reductions in novel CSP plants, which may use it both as TES material and solar absorber. The success of the Sandstock project reflects that usability and practical benefits of the UAE desert sand.” 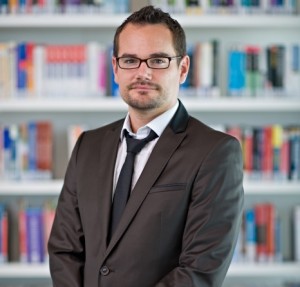 The technology the Masdar Institute’s thermal energy storage research team is designing would use two tanks filled with sand, using gravity to transfer it from one tank to the other, as in an hourglass. The upper tank will hold the “cold” (but still 250°C) sand, with the heated (800°C) sand in the lower tank.

The cold tank is a hollow cylinder, with the beam of energy from the solar reflectors focused down the middle. When a valve is opened, the sand will flow into the path of the beam, and the concentrated solar energy will heat it. The hot sand is recovered and stored in the lower tank until energy is needed. To discharge the system, a heat exchanger is immersed in the heated moving sand, producing superheated steam that runs the turbine. The cooled sand is then sent back to the top of the cold tank by a conveyer belt to close the loop of this continuous process.

In parallel to sand characterization, a laboratory scale prototype was tested with a small solar furnace at the laboratory of PROMES CNRS 1 MW solar furnace in Odeillo, France. Masdar Institute alumnus Alberto Crespo Iniesta was in charge of the design, construction, and experiment.

The next step of the project is to test an improved prototype at the pre-commercial scale at the Masdar Institute Solar Platform (MISP) using the beam down concentrator, potentially in collaboration with an industrial partner.

Given Abu Dhabi’s goal of 7 per cent renewable electricity from renewable resources by 2020, a TES system based on such a local and natural material also represents a new sustainable energy approach that is highly appropriate for the economic development of Abu Dhabi’s future energy systems.

The analyses clearly showed that it is possible to use desert sand as a TES material up to 800-1000 °C. The sand chemical composition was analyzed with X-ray fluorescence (XRF) and X-ray diffraction (XRD) techniques, which reveal the dominance of quartz and carbonate materials. The sand’s radiant energy reflectiveness was also measured before and after a thermal cycle, as it may be possible to use the desert sand not only as a TES material but also as a direct solar absorber under concentrated solar flux.

This technology, once perfected, should provide the UAE’s solar program with an efficient, cost-effective and environmentally friendly way to store energy for CSP plants 24 hours a day, seven days a week. Part of the plan is to adapt the technique for other industrial processes, and thus reduce the net energy use of these facilities.