One challenge of fuel cell technology is developing a cost-effective, easy-to-produce catalyst that aids the splitting of water molecules to produce the hydrogen fuel. Now, scientists at Indiana University (IU), Bloomington, have created a highly efficient biomaterial that catalyses hydrogen formation, by encapsulating bacterial genes within a self-assembled protective viral shell.

The biological enzyme hydrogenase is a highly sophisticated material that catalyzes hydrogen production in bacteria. Synthetic imitations have been developed as alternatives to the effective but expensive platinum metal catalyst traditionally used in fuel cell electrodes. However, it is difficult to produce large quantities of natural hydrogenase, and the enzyme is highly sensitive to environmental conditions.

Led by Trevor Douglas, professor in the IU Bloomington Department of Chemistry, the team isolated two genes from the common bacteria E. coli which encode key subunits of the hydrogenase enzyme. These were inserted into the protein coat of a bacterial virus known as bacteriophage P22. Under the control of different promoters, the hydrogenase genes were expressed and allowed to mature first; subsequently, the viral coat protein self-assembled. This harnesses the virus’ self-assembly abilities to generate a protective package containing subunits of hydrogenase. The resulting material, called “P22-Hyd,” is a virus-like particle that is 150 times more efficient than the unaltered form of the enzyme. Further, it is easily produced through a fermentation process at room temperature. 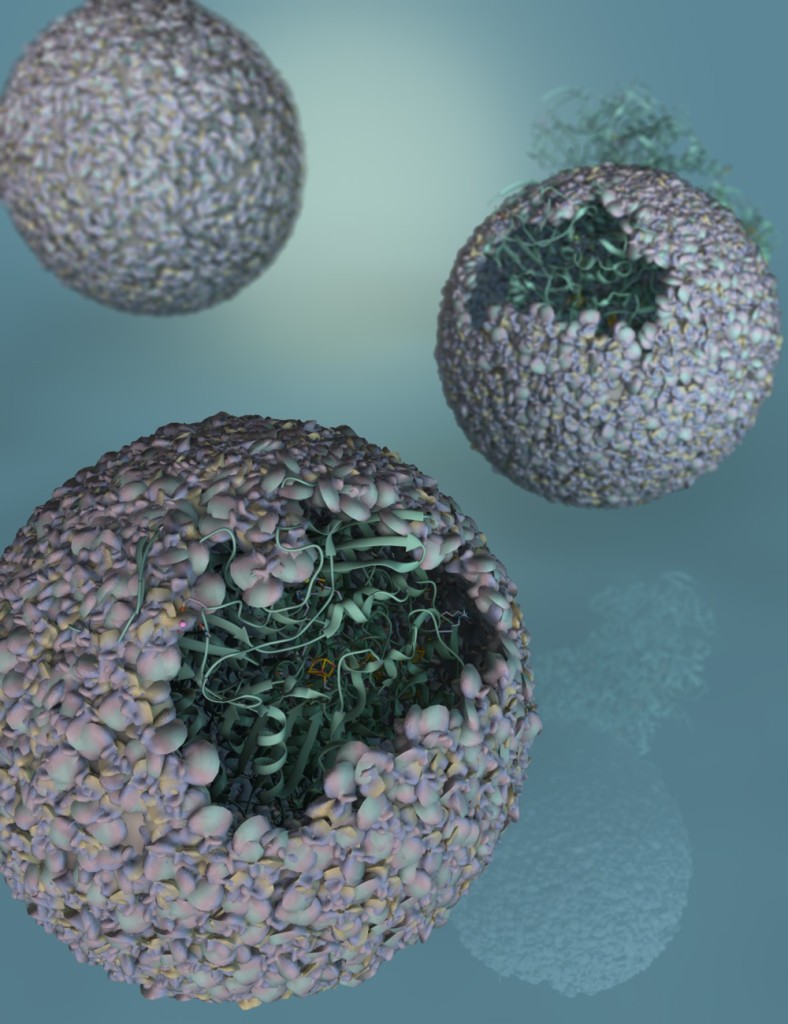 An artist’s rendering of P22-Hyd, a new biomaterial created by encapsulating a hydrogen-producing enzyme within a virus shell. (IU/Trevor Douglas)

“The material is comparable to platinum, except it’s truly renewable. You don’t need to mine it; you can create it at room temperature on a massive scale using fermentation technology; it’s biodegradable. It’s a very green process to make high-end sustainable material,” said Douglas in a press release issued by IU Bloomington.

Not only does the new material aid the water-splitting process to produce hydrogen gas, but it also aids the reverse process of recombining hydrogen and oxygen to generate power. It can be used either as a hydrogen production catalyst or as a fuel cell catalyst. The encapsulation provides stability and protection to the hydrogenase cargo.

The form of the enzyme encoded by the E. coli genes, nickel-iron (NiFe) hydrogenase, can easily integrate into biomaterials and tolerate exposure to oxygen. But the natural form is highly susceptible to destruction from chemicals in the environment, and it breaks down at chemicals above room temperature. Hence, in its unprotected form, it has struggled to live up to its promise in technology applications such as biofuel production. Thanks to the IU research, there is now a way to stabilize and produce potentially large quantities of the material.

Douglas and colleagues plan to investigate ways of activating a catalytic reaction with sunlight, as opposed to introducing electrons using laboratory methods. They plan to continue to craft the P22-Hyd into an ideal catalyst for hydrogen power and incorporate it into a solar-powered system.

The work was published in Nature Chemistry in December 2015. Read more here.