Lithium-air, or lithium-oxygen, batteries have been hailed as the ‘ultimate’ battery due to their theoretical energy density, which is ten times that of the conventional lithium-ion battery. They would be sufficient to power cars with a range comparable to those with gasoline engines. However, attempts to develop this technology have been plagued by problems in efficiency and performance. Now, researchers from the University of Cambridge have overcome some of these challenges and demonstrated a lithium-air cell that is over 90% efficient, and that can be recharged more than 2000 times.

The model relies on a highly porous graphene electrode and additives that alter the battery’s chemical reactions, making it more stable and efficient. Published in Science, the results point to a practical device – a device which, the team cautions, still remains at least a decade away.

The lack of a small, lightweight, long-lasting battery is a limiting factor for widespread adoption of major ‘clean’ technologies including electric cars and grid-scale storage for solar power. Conventional lithium-ion batteries need to be recharged frequently, and their capacity deteriorates with age. Alternatives have been sought over the past decade, and the lithium-air battery comes as close as possible to the theoretical limits for energy density in a battery, which makes it the goal for next-generation energy storage.

Until now, lithium-air cells have comprised a lithium metal negative electrode, a nonaqueous lithium ion electrolyte, and a porous positive electrode. During discharge, oxygen is reduced and combines with lithium ions at the positive electrode, forming an insoluble product (lithium peroxide) that fills the porous electrode. But this product needs to be thoroughly removed to prevent the electrode pores from rapidly become clogged after a few cycles. Demonstrations have shown low efficiency, poor rate performance, unwanted chemical reactions, and ability to be cycled only in pure oxygen. 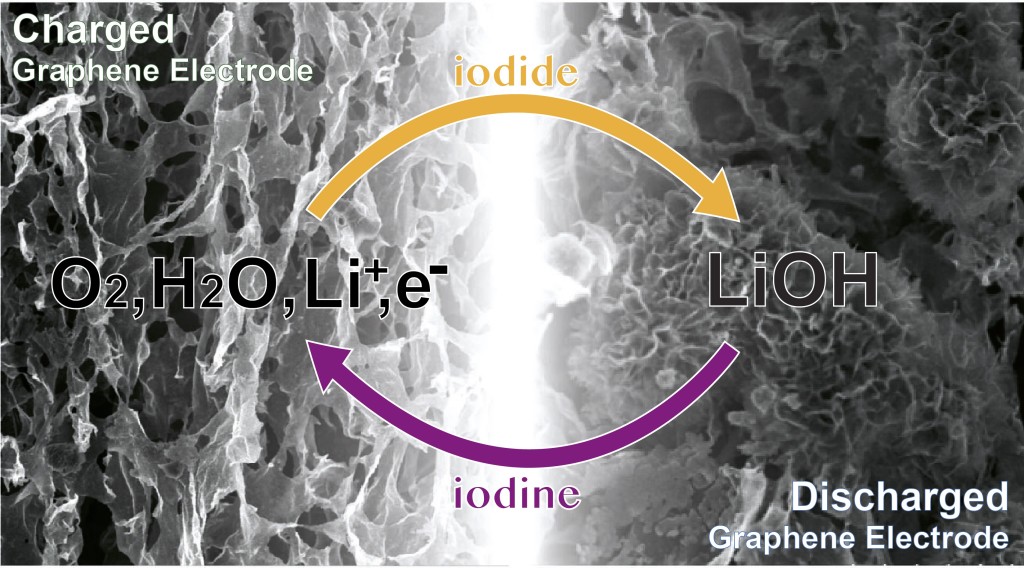 A schematic showing the formation of lithium hydroxide (LiOH) on the graphene electrode on discharging a non-aqueous lithium-oxygen battery in the presence of the redox mediator, lithium iodide, and trace water. CREDIT: Gabriella Bocchetti, Tao Liu and Clare Grey, University of Cambridge

But the new model, whose development was led by Professor Claire Grey and Tao Liu of Cambridge’s Department of Chemistry, used a very different chemistry. The team used a reduced graphene oxide electrode, with an additive and a solvent to reversibly form and remove crystalline lithium hydroxide during battery discharge and charge, respectively. With the addition of water and the use of lithium iodide as a ‘mediator’, their cells showed fewer of the chemical reactions which can cause cells to die, making it far more stable after multiple charge and discharge cycles.

These modifications reduced the ‘voltage gap’ for the open circuit voltage between charging and discharging to only 0.2 volt. A smaller voltage gap represents a more efficient battery. The Cambridge team more than halved the voltage gap of previous lithium-air batteries to achieve a value closer to that of lithium-ion batteries, creating an energy efficiency of 93%. They also demonstrated impressive rechargeability and circumvented the need to remove atmospheric water: the cell tolerated high concentrations of water, which is a proton source for the reversible reaction.

The results offer hope for the development of a practical device, but problems inherent to this chemistry still remain. “While there are still plenty of fundamental studies that remain to be done, to iron out some of the mechanistic details, the current results are extremely exciting – we are still very much at the development stage, but we’ve shown that there are solutions to some of the tough problems associated with this technology,” said Grey.

IMAGE: A schematic showing the formation of lithium hydroxide (LiOH) on the graphene electrode on discharging a non-aqueous lithium-oxygen battery in the presence of the redox mediator, lithium iodide, and trace water.  CREDIT:  Gabriella Bocchetti, Tao Liu and Clare Grey, University of Cambridge